Most economically powerful countries have a head start in terms of capacity to meet the United Nations’ Sustainable Development Goals. Yet, having the means doesn’t necessarily mean having the will. How does this impact on citizens’ life satisfaction?

Unsurprisingly, the report finds that the richer the country, by and large, the better its performance in the Bertelsmann index. Norway, for example, has the highest GNI per capita (PPP) in the OECD, $65,970 in 2014. It ranks second in the Bertelsmann index, outperformed only by Sweden, another high-income country, with a GNI per capita of $46,710 in 2014.

The worst performers in the index, similarly, are those with lower incomes – Mexico comes last both in the Bertelsmann rankings and in GNI per capita, just $16,710 per person in 2014, and Turkey places second last, with a GNI per capita of $19,040 in 2014.

United States is bucking the trend

But within this broader trend, one anomaly stands out. The United States had a GNI per capita of $55,860 in 2014, the fourth highest in the OECD after Norway, Switzerland and Luxembourg – and yet the US ranks 29th out of the 34 countries measured in the Bertelsmann rankings.

On inequality as measured by the Palma ratio, the United States outranks only Turkey, Mexico and Chile. Despite its high GNI, the United States’ wealth is concentrated among the wealthiest in its society, and the lowest-earning 40% of its people have less than the top 10%.

Economic power thus cannot be seen as the sole determining factor in capacity to meet the SDGs: countries such as Poland, Estonia and Slovenia outperform the US with GNIs of half its size.

SDGs’ focus on growth is in itself unsustainable

The SDGs themselves have faced criticism for the priority they place on economic development, one of just a few indicators in which the US performs well – the eighth SDG is to “promote sustained, inclusive and sustainable economic growth, full and productive employment and decent work for all,” and the US’s GNI places it at fourth in the Bertelsmann rankings on GNI per capita.

However, critics are concerned that this focus on growth is in itself unsustainable, a paradox within the effort to achieve sustainable development: this kind of growth, they say, necessitates ever-increasing production and consumption, which militates against the world’s potential to achieve other key goals such as Goal 12, “Ensure sustainable consumption and production patterns,” and Goal 13, “Take urgent action to combat climate change and its impacts.”

Relatedly, the SDGs have been criticized for failing to identify clearly enough where the money will come from for meeting the associated targets. If countries cannot do more with less, as some of the lower-income high-performers in the Bertelsmann report have done, who is to foot the bill?

The Bertelsmann index measures Overseas Development Aid (ODA) as part of its assessment of Goal 17, “Strengthen the means of implementation and revitalize the global partnership for sustainable development.” Again, the US performs poorly. The top three countries by GNI, Norway, Switzerland and Luxembourg, all rank among the top eight countries in providing a high percentage of their GNI for ODA – 0.99%, 1.07% and 0.49% respectively. The US ranks 19th – it gives just 0.19% of its GNI to ODA, the exact same percentage dedicated by crisis-stricken Portugal to overseas aid.

The third SDG is to “Ensure healthy lives and promote well-being for all at all ages.” Economic power has been shown to be an important factor in life satisfaction – but it is not the only factor, as evidenced by the fact that Luxembourg, the country with the third highest GNI, places only 15th out of 34 on the Bertelsmann’s life satisfaction indicator, and Mexico, with the lowest GNI, places a relatively respectable 20th out of 34 in life satisfaction. The US, for its part, places 11th, much better than its ranking of 29 in the results as a whole. 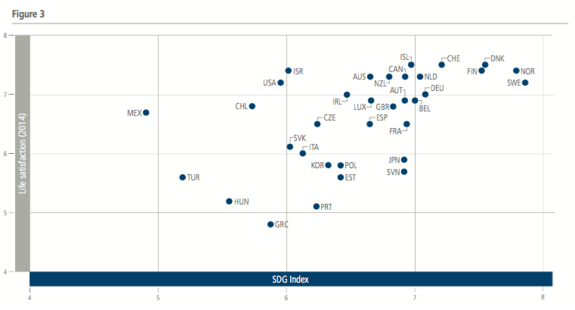 However, it is clear that although there may be no direct link in all cases between better performance on achieving the SDGs and greater happiness, there is at least no conflict between high performance in the SDGs as a whole and higher life satisfaction – providing public goods does not limit the ability of a country to ensure the wellbeing of its population. Denmark’s people are the happiest in the OECD, according to the 2014 Gallup figures used in the Bertelsmann study, and Denmark ranks third overall in the SDG rankings.

The SDGs represent something for the world to aim at, even if they do not offer a perfect guide to achieving global equity. The most economically powerful countries have a head start in terms of capacity to meet the goals, and many of them are working to do so, to the benefit of their own populations and the people of the world as a whole. But the US, which sees itself as a global leader, must do more to live up to its own self-image – it has the means to meet the UN’s goals, but it remains to be seen whether it can also find the will.