Europe and the Czech Republic

Milos Zeman, a strong supporter of European integration, will be the next president of the Czech Republic: an opportunity to examine the relations between his country and Western Europe. Does the Iron Curtain still exist?

What country is richer than Portugal and Greece, has less debt than Germany, and has less poverty than the Nordic countries? Most might not immediately think of Central Europe, the “West” being the symbol of modernity and development, but this country is the Czech Republic.

The Czech Republic is set to be the first Central European country, according to several important indicators such as GDP/capita, debt and income equality, to have a qualitatively superior economy to many Southern European economies. The achievement is all the more impressive given that the Czech economy was mismanaged during the Communist years and only in 2004 began reaping the benefits of EU membership (namely trade and aid).

Today still, European construction can be understood as a project to undo and prevent the harm done by nationalism, war and totalitarianism. At least since the fall of the Berlin Wall in 1989, the European Community (and now Union) has had as one of its major objectives the “reunification” between East and West, and the undoing of the wrongs wrought by Stalinism.

This would notionally be achieved if and when Central and Eastern European countries have fully converged with, or surpassed, the “West” in terms of economic development, their participation in international institutions, and their democracy.

The Czech Republic has effectively achieved this convergence. This is somewhat appropriate given the country’s history: Interwar Czechoslovakia was the only Central European country with significant industrial development and the only steady democracy. After the Second World War, Czechoslovakia was the last democracy to fall to a Communist dictatorship.

The legacy of Communism still scars Europe in terms of economic development. A look at GDP per capita by region shows that, over twenty years after the opening of the Iron Curtain, former Communist countries are still significantly poorer than their Western counterparts (similarly, within Germany, higher unemployment and poverty is characteristic of the former East Germany).

However, convergence is also a reality. Between rising GDP per capita in the East and economic crisis in the South, the old definition of “Western Europe” is rapidly becoming meaningless. As measured by GDP per capita, standards of living in the Czech Republic have already surpassed those of Portugal and Greece. Given that the economic crisis is likely to continue for years in the eurozone periphery, the Czech Republic is also very likely to make significant progress in converging with Spain and Italy.

The Czechs have made little progress since the 1990s in terms of GDP convergence, maintaining their level at around 80 per cent the EU average. However, this apparently mediocre performance must be borne in mind with the fact that the Czech Republic has been far less reliant than the rest of the EU on unsustainable public debt (as in Greece and Portugal) or financial speculation (as in Ireland and Spain) to fuel its growth. As such, Czech growth, while perhaps more moderate than might have been expected, has been on a much sounder footing than most older EU Member States.

The Czech Republic excels in others areas, less known: anti-poverty, income equality and social cohesion (with the significant exception of the poor integration of the Roma minority). The country’s income equality is on a par with the famously egalitarian Nordic nations and, if anything, the relative poverty rate is lower. 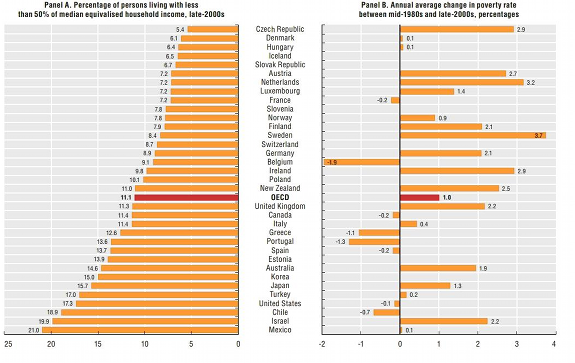 This achievement is all the more remarkable in that the country has not followed traditional models in this respect. While social transfers (pensions, welfare) contribute to reducing the poverty rate by three quarters, poverty is low mainly because pre-transfer already income is relatively equal. Indeed, and unlike in the Nordics, the tax burden is at only 34.8 per cent of the economy.

A New Model for the West?

All this is not to say the Czech Republic is a paradise. These impressive macro indicators need to be contrasted with some of the country's problems. Relations with the Roma minority are poor and discrimination, especially in the field of education, persists. Indeed, the social exclusion of the Roma population remains a great challenge for the country, as it is the case in other Central and Eastern European countries.

Moreover, though the Czech economy is dependent on foreign workers, few migrants are persuaded to settle permanently. The country's medium-term growth prospects may also be endangered by low research investment and low attendance of higher education.

These problems should not be downplayed, but they are not unique to the Czechs and some are indeed shared with Western countries. The Czech Republic's achievements remain remarkable in a time of economic crisis, when many Western countries are struggling to find sustainable models of growth and maintain a modicum of social justice. The Czech achievement, and the convergence of Central and Eastern European countries more generally, show that Western Europeans should more curious of their Eastern neighbors and more willing to learn from them.

Central and Eastern European countries were able to have a “fresh start” after the fall of Communism and adopt a wide variety of models of development and policy experiments. In some cases, as with the Czech Republic’s remarkable combination of low inequality and low taxes, it is the Western countries who should be seeking a model.

As the current socioeconomic and political crisis shows us every day, the “West” and the world’s developed democracies generally do not entirely deserve the prestige they have (had?) as the embodiments of “modernity,” the models for everyone else. Central Europeans should be more confident and autonomous in their policies and objectives.

Indeed, while in the 1990s and early 2000s Central European countries more or less systematically followed Western leadership (to adopt similar domestic institutions, to join NATO and the EU, to participate in the “War on Terror”), Prague and Warsaw have in recent years been more critical and independent on many issues.

The Path to European Integration

In addition, Czech success relative to Southern Europe highlights the risks in adopting foreign models, simply because they are prestigious, without addressing domestic problems. Greece, Spain and Portugal also sought to join the modern, democratic European “core” by acceding to the European Community and later the euro common currency.

The trade and aid enabled by this was supposed to be the path to prosperity, but in fact development is almost always primarily dependent on the quality of domestic institutions and social capital. The unhappy economic experience of Southern Europe suggests aiming to rely on easy European money may in fact be counterproductive if it masks domestic problems and is used to enable growth through financial speculation and nepotistic use of subsidies.

No state of affairs is permanent and success often begets negligence. Hence, the Czechs should be careful to safeguard what they have already achieved. The country’s debt level is mostly steady, but has increased throughout the crisis. In addition, as in many other countries, inequality is increasing rapidly through perhaps misguided reforms.

As the Sustainable Governance Indicators of the Bertelsmann Foundation note in their report about the Czech Republic, recent tax reforms “were largely revenue-neutral” but “reduced the tax burden on companies and the better-off, but did little to reduce the high non-wage labor costs associated with large social security contributions.” As in all countries, “virtue” and good habits must be constantly maintained.

But for now we can say that, in a real sense, the Czech Republic has fully emerged from the Iron Curtain and become a “normal European country”: A major step in the long process of European reunification, a project that entails deep changes in every society, and not just the superficial joining of political institutions.

Craig J. Willy can be reached via Twitter @craigjwilly.

Study: SGI 2011
What are the SGI key findings about the Czech Republic?