Developing With The Future In Mind

All OECD countries are currently creating an ecological footprint that exceeds the earth’s capacity. In order to ensure intergenerational justice, nations must consider the impact of today’s development and exploitation of natural resources on future generations.

In October, Christiana Figueres, the head of the United Nations body tasked with producing a global climate treaty gave an impassioned speech during which she stated that future generations are being condemned by the lack of a global agreement. Political action is required to rectify the existing prejudice of development in favor of current generations, with disregard for the future. Intergenerational justice may be improved and sustainable development enhanced, by investing in youth and in using financial incentives to deter unsustainable practices.

A recent study on "Intergenerational Justice in Aging Societies" by the Bertelsmann Foundation's Sustainable Governance Indicators (SGI) project examines the ecological footprint of 29 OECD countries. It found that none of the surveyed countries are intergenerationally just, in that their impact on the planet exceeds the land’s capacity to sustain the activity. The ecological footprint calculates the rate of resource consumption and waste generation, and compares it to how rapidly nature can absorb waste and regenerate. Therefore, it provides a measurement of a nation’s development, and captures the pressure human societies put on their natural environment.

Due to the ease of its application and messaging, the ecological footprint statistic can grab media attention and catalyze change in policy. Ecological footprint calculations are relatively easy to undertake because the data required is largely available at different spatial scales. As its output is a single number, of global hectares per capita required by an economy to produce all the goods consumed in that economy and absorb the wastes generated in production, it can enhance efforts to assess and compare sustainability of development between countries.

Despite these advantages, ecological footprints have their limitations. Ecological footprints are an analysis of a country at a certain moment in its development. Therefore, its measurement is static in time and may not consider all of the complexities of regional trade flows, or technological change occurring rapidly within a nation. Other researchers have worked to develop tools that examine the social welfare of today’s rate of development, producing the Index of Sustainable Economic Welfare (ISEW), among others. The ISEW distinctly incorporates environmental damage and natural resource depletion, and distinguishes between water, air, and noise pollution, the loss of wetlands and farmland, and the long-term repercussions of environmental damage.

While tools to assess the pressure of human societies on the Earth's systems all have their limitations, they embolden nations' understanding of the impacts of our actions, and our efforts to develop more sustainably. As the ecological tool is employed, studies indicate that we are drastically overshooting the capacity of the Earth to support our current rate of consumption and waste generation. Findings reveal that if all people were to live as Americans do, five planets of resources would be required.

Based solely on its ecological footprint Hungary is the most intergenerationally just of all countries surveyed in the SGI study. It shows a footprint of 3.6 gha (global hectares) per capita, followed by Poland (3.9 gha) and Israel (4 gha). Estonia – which ranks top in the overall SGI assessment of intergenerational justice when we also consider social and fiscal dimensions – scores fairly well with a footprint of 4.7 gha.

Denmark, the United States, and Belgium, score the worst, with ecological footprints of 8.3 gha, 7.2 gha, and 7.1 gha, respectively. For just intergenerational action globally, the ecological footprint per capita should be below 1.8 gha. This means that even those countries which score relatively well in international comparison do not sufficiently compensate for their resource use. 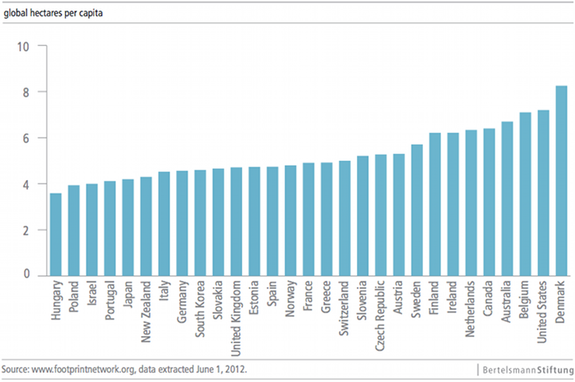 Although, for instance, both Denmark and Estonia emphasize the long-term global consequences of their actions in their national sustainable development plans, their ecological footprints are dramatically different. Some studies attributed Denmark’s high ecological footprint to its meat consumption and production, while other studies did not indicate whether Denmark’s ecological footprint was the result of high levels of individual consumerism, or industrial activities. This lack of specificity of the ecological footprint highlights another limitation of the measurement. 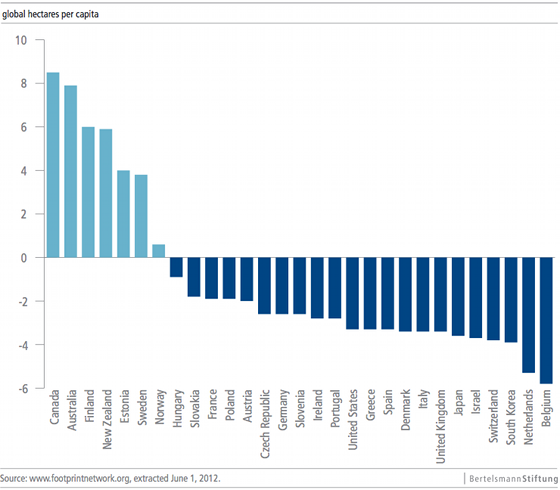 While ecological footprint is but one measurement that can contribute to our understanding of intergenerational justice, it is a valuable component that helps communicate that the impacts of today’s actions have an enduring legacy. The consequence of which must be considered and accounted for in our development plans.

As the meetings in Warsaw for the 2013 United Nations Climate Change Conference showed, the issue of fairness between countries remains a pressing one, as developing countries argue that they must exploit the resources available to them to grow their economies. As nations struggle to determine what is just, and how climate change should be addressed in an approach that is equitable and economical, the intergenerational impacts of climate change must not be overlooked due to political shortsightedness.

As Locke’s proviso states there should be “enough and as good” left in common for others. Today’s practices recklessly abandon this principle, and have sculpted a future that is characterized by inequality and ecological crisis. It is not too late to act, and augment intergenerational justice by developing resources today with the needs of future generations in mind.

Antonia Sohns is a Water and Energy Analyst at the World Bank and co-author of “Sustainable Fisheries and Seas: Preventing Ecological Collapse,” in State of the World 2013 of the Worldwatch Institute. She writes this article in her personal capacity.