Long-Term Wellbeing of European Societies is at Stake

Children and young people are among the biggest losers in the European economic and debt crisis. What do the staggering numbers in youth unemployment and child poverty in Europe mean for the future of this generation – and the continent as a whole?

While Europe continues to struggle to leave the legacy of the financial crisis behind, an entire generation is feeling the effects of the economic fallout most directly. The remarkable increase in youth unemployment since 2008 is perhaps the most disturbing sign of this scenario. In over a dozen European economies, youth unemployment remains today above 20 percent, and more than one in three unemployed young people have been looking for work for more than a year, according to the Global Employment Trends for Youth.

If you live in Spain or Greece and are between 15 and 24 years of age, you are just as likely to be unemployed as to enjoy the privilege of a work contract. The situation does not improve much in other EU countries, where unemployment rates among young people grew from about 15 percent in 2008, before the crisis, to 22.2 percent in 2014, affecting 5.3 million young people. 7.5 million Europeans between 15 and 24 are not in employment, education or training.

In the crisis-battered southern European countries, life opportunities have declined while the risk of poverty among children and youth has increased since 2007/08, according to the latest EU Social Justice Index of the Bertelsmann Stiftung. 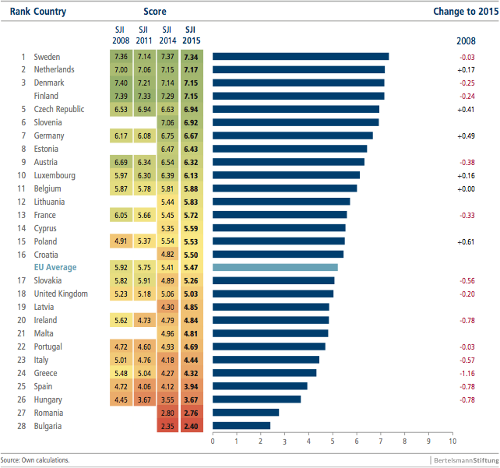 The study contains dramatic numbers, such as 35.8 percent – more than one third – of children and youth today who are at risk of poverty and social exclusion in Spain. The rate is 31.7 percent in Portugal. In Greece, it stands at 36.7 percent, while the share of children living under conditions of severe material deprivation has more than doubled from 9.7 percent in 2007 to 23.2 percent in 2014.

In a study published in 2011, David N. F. Bell and David Blanchflower show that long-term youth inactivity leaves a heritage of reduced lifetime earnings, a large risk of future periods of unemployment and a high likelihood of precarious employment, and it results in poorer health and well-being and lower job satisfaction more than twenty years later.

Additionally, this situation impacts the political scene, where young Europeans appear highly skeptical that those in power are able to address their needs. The shakiness of the labor market and the threat of economic deprivation and social exclusion are all contributing to a growing mistrust of institutionalized politics. Displeasure and frustration are the driving forces behind new forms of political participation, such as Los Indignados, a grassroots protest movement that has grown into the Podemos political party, which won over 20 percent of the votes in the Spanish general elections last December.

No wonder then that leaders and European institutions consider this one of the most important issues to tackle. In France, where youth unemployment is at a distressing 25.1 percent, the government recently unveiled new plans, to train young jobseekers and encourage job creation. The same objectives are integrated in the Europe 2020 strategy.

Although the scenario is grim for most EU countries, some of them have managed to go against this trend. Countries such as Germany and the Netherlands remained under 12 percent youth unemployment in 2015. According to Alain Dehaze, head of the world's largest recruitment company, this is because those countries are better at blending formal education, apprenticeships, work and international experience.

The EU Social Justice Index points out that in Europe as a whole “governments must seek to improve vocational training, reduce the number of early school leavers and improve the transition from the education system to the labor market.“

Poverty is a vicious circle

Whereas young people face hardships transitioning to independence and adulthood in a post-crisis economic context, children are among the biggest losers in countries where the recession has hit hardest.

The most recent Innocenti Report Cards, a UNICEF publication devoted to the living conditions and well-being of children in economically advanced countries, reveals a strong correlation between the extent to which the recession ravaged national economies and the decline in child well-being since 2008.

Some 1.6 million more children were living in severe material deprivation in 2012 (11.1 million) than in 2008 (9.5 million) in 30 European countries. The largest increase in child poverty has been in southern Europe – in Greece, Italy and Spain – as well as in Croatia.

According to the study, children from families who have experienced difficulty remaining in the labor market and satisfying their most basic material and educational needs suffer the stress directly. “Poverty is a self-reinforcing cycle. A child with unemployed parents may do less well at school. Doing less well at school may bring more stress at home. And so on. The longer a child is locked in the cycle, the fewer the possibilities of escape,” the report says.

The EU Social Justice Index does not present a more comforting picture but it highlights some of the ways which can reduce child poverty in Europe: governments should set priorities so that those disadvantaged in society “receive targeted support through a functioning tax and transfer system (e.g., effective child benefit and allowance schemes, housing benefits).” However, “combating poverty is not only a question of monetary support, it also depends on sound policies in other areas, such as education and employment,” the experts warn.

Measures to reverse the deterioration of children’s quality of life are urgently needed to avoid highly disturbing future prospects, not only for this generation, but also for Europe as a whole.

Natalia Mazotte is a Brazilian journalist. She blogs for the Knight Center for Journalism in the Americas and writes for SGI News.